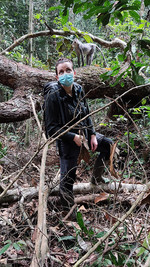 I am a PhD student interested in non-human primate communication and particularly in unravelling call meanings in their vocal systems. I particularly focus on the meaning of call combinations by studying two habituated groups of sooty mangabeys in the Taï National Park (Ivory Coast).

Some primate species can combine their calls to create new meaning, which has been recently defined as compositionality. But what are the evolutionary drivers behind the emergence of compositionality in primates? Complex social systems, for example, are suggested to promote intricate and flexible vocal communication to manage social interactions. Moreover, an expansion of vocal systems might be expected in habitats where poor visibility prevents group members from maintaining group cohesion through visual contact and/or limits effective signaling of the location of predators, such as rainforests. To explore the idea that forest environments can act as a driver of compositionality in social primates, I am currently testing if sooty mangabeys, a highly social forest monkey species, can produce meaningful call combinations. These results, compared with previous and ongoing studies on animal compositionality, will shed light on the evolution of complex communicative systems, precursors of human syntax.