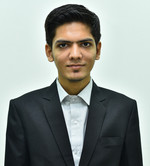 Pathik Parekh pursued his master’s degree from the National Institute of Pharmaceutical Education and Research (NIPER) in India in 2017. Where he studied the role of autophagy in the neurotoxin-based animal model of Parkinson’s disease (PD).

He is pursuing his Ph.D. from the University of Cagliari, Italy where his main goal is to investigate the neuroprotective and anti-inflammatory potential of natural products in the preclinical model of PD.

As a part of his Ph.D. program, recently he joined the team of Prof. Véronique Sgambato at the Institute of Cognitive Sciences, Lyon to study behavioral disorders in the non-human primates which recapitulate symptoms of PD and to understand the brain structures involved behind the observed neurodegeneration in PD.